After 137 years of construction, overseen by 10 architects, one of Spain's tourist attractions finally has been granted a building permit.

La Sagrada Familia, Barcelona's modernist masterpiece, was granted the permit in what may be a new high mark for bureaucratic sluggishness.

Janet Sanz head of the Barcelona's urban planning said the city council had finally managed to "resolve a historical anomaly in the city -- that an emblematic monument like the Sagrada Familia... didn't have a building permit, that it was being constructed illegally."

The Sagrada Familia foundation said it hopes to finish construction by 2026, to coincide with the 100th anniversary of chief architect Antoni Gaud's death.

Even though construction of the neo-Gothic church began in 1882, authorities only discovered in 2016 that it never had a building permit, although Gaudi had applied for one.

Gaudi died after being hit by a tram when only one of the church's facades was finished.

Since then, 10 architects have continued his work, based on Gaudi's plaster models, and photos and publications of his original drawings, which were destroyed in a fire during the Spanish Revolution.

Every year more than 4.5 million people visit the basilica, which was named a UNESCO World Heritage Site in 2005.

When completed, its central tower will make La Sagrada Familia the tallest religious structure in Europe, at 172.5 meters, according to the builders. 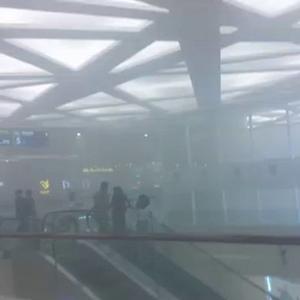